On May 14, 1956, Airman Third Class Fred E. Higinbotham was working with his fellow Air Force crew to refuel an F-86F Sabre jet on the island of Okinawa in Japan. Their goal was to move quickly and get the jet back in the air as soon as possible.

Higinbotham’s job was to secure a static line cable onto the nose gear of the plane as soon as it stopped. This line prevented the buildup of static electricity which could produce sparks and potentially ignite the fumes produced during the refueling process.

The Air Force had strict rules in place that prohibited anyone from getting too close to the intake duct of the fighter’s jet engine. Since this was their last servicing job for the day, the crew was anxious to get the job done.

As part of the post-flight procedure, the pilot advanced the throttle to 65% power, which he was supposed to do for a period of two minutes before shutting the engine down. Just as this was happening, Higinbotham felt the tug of the jet’s intake on his back but continued to hold on to the static cable. He didn’t realize it at the time, but he had gotten too close to the engine’s intake.

Suddenly, his hat was pulled off of his head and Higginbotham instinctively turned around to grab it. The next thing you know, he was flying through the air and was sucked right into the jet engine. One would have expected Higginbotham to have been torn to shreds by the blades of the engine, but that didn’t happen.

Instead, he was stopped by the engine’s power take-off case cover, which projected outward from the blades in a cone shape. He used all his might to keep away from the whirling blades, which were just 6” (15 cm) from his head.

About thirty seconds after the pilot advanced the throttle, he felt a bump in the engine’s operation. He also spotted a mechanic frantically waving a rag in the air to get his attention. That worked. The pilot immediately cut power to the engine and the rotors began to slow down.

Just as Higginbotham started to back out of the engine, someone grabbed his legs and pulled him out of the engine completely. Amazingly, he still had the static cable in his hands, although it was wrapped twice around both his waist and legs. Later investigation determined that the cable had become fully extended when Higginbotham was sucked into the engine and that most likely saved his life.

Higginbotham’s injuries were minor: he had some cable burns and minor abrasions, but that’s it. He was released from the hospital and was back on the job the very next day. 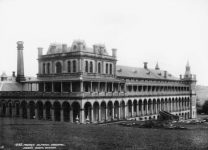 In 1931, Charles Edmund Kneale slipped off of a ladder and fell 30 feet to his death. Two different Mrs. Kneales claimed the body. 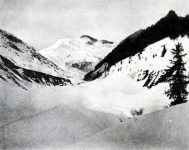 Evert Stenmark was hunting alone for ptarmigan and was buried by an avalanche. Day after day he remained trapped under the snow. Find out how he survived.