On August 4, 1960, a mule in Shallotte, North Carolina managed to wreck three cars.

The mule remained lying in the road for an additional 15-minutes, at which point a third car driven by Benjamin Booker hit him. The first two drivers ended up in the hospital with injuries. The mule was not as lucky and lost its life after the third collision.

A New Jersey man was caught in a Catch-22 situation: As long as he remained on death row, he could live. If he attempted to get off of death row by challenging his sentence in court, he would likely die. Can you guess which option he chose? 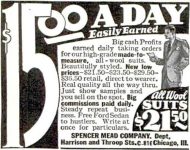 In 1920, Great Britain was importing men's suits that were made of paper.