It was reported in the February 19, 1902 edition of the New York Times that 18-year-old Alfred De Chico walked into the Bedford Avenue police station in NYC claiming that 18-year-old Salvatore Carricato had shot him three times.

The two had been rivals in love, so Carricato snuck up behind De Chico as he was escorting two women and opened fire.  He had shot three 32-caliber bullets into De Chico’s back and then ran away.  As De Chico entered the police station, there was no overtly apparent evidence of the shooting.  No blood could be seen and he was absolutely in no pain.

How could that be?

As De Chico unbuttoned his coat and vest, three flattened bullets fell to the floor.  It turns out that all of the bullets had hit the right buckle of his suspenders and saved his life.

Carricato was arrested and admitted in court to the crime.

The question arose in 1932, during Prohibition, whether or not the quota of sacramental wine for Jewish families should be increased. 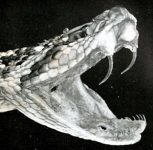 James Stoner used rattlesnakes to keep other men away from his wife. His attempts to do so backfired on him.