When my wife and I arrived in Paris last summer, we needed transportation to the Airbnb that we had rented just outside the city. Not knowing how to get there by train yet, our only options were a cab or Uber. It was about a 40-minute ride from the airport, so we weren’t shocked by the high fare to get us there. Surprisingly, the cab was slightly lower in cost than the Uber.

But what if one wanted to go a much farther distance? A taxi wouldn’t make much sense. A train or airplane would be far cheaper and take significantly less time. The story I have for you today is a situation just like that.

So, let’s hop in our Delorean and take a trip back in time to April 21, 1966. Our destination is the dispatch center for the Black and White Cab Co. in Toledo, Ohio. An unnamed woman calls in and requests a taxi to take her from Toledo all the way out to San Francisco, California.

Since I know that a lot of my listeners don’t reside within the United States, I will tell you this: That is a very long distance. Depending on the path that you take to get there, it is roughly a distance of 2,400 miles or 3,860 kilometers. The cab company did their own estimate and came up with 2,428 miles.

The cab company clearly had both the drivers and cars needed to make such a trip, but who in their right mind would want to pay for a taxi to travel such a long distance? They figured $0.50 per mile and quoted her a flat-fee price of $1250. That would be about $9,800 today, adjusted for inflation.

Even though the quoted price was outrageous, the woman was insistent on having a taxicab take her to the West Coast. In addition, she had one other request: she wanted the cab to be driven by 43-year-old Paul Mertz because he had driven her to Detroit and Chicago over the previous week. Mertz had gained her trust and was shocked by her request to have him drive her to San Francisco. He stated, “I couldn’t believe my ears.”

In what would be Black and White Cab’s longest trip ever, they required the woman to pay for all other incidental costs, including meals and lodging. And to avoid fatigue, fellow Toledo driver 39-year-old Chester Reneau would accompany Mertz so that the two could take turns driving.

The terms were agreed to and the woman proceeded to write a check for $850 as a down payment. The remainder would be due upon their arrival in California.

Melvin Farrell, dispatcher for the cab company, told the press, “The person just wanted to rent a cab to go, she had the money and so she went.”

At 9:30 PM on that same day – April 21, 1966 – the three of them took off in the taxicab. Their first stop was about four-hours later at the woman’s home in Munster, Indiana. It was there that she picked up her luggage – enough to fill the entire trunk – and her pet Chihuahua, Tiny Mouse. He would ride with her in the backseat for the entire trip.

The woman expressed a fear of heights, so the drivers opted to drive along Route 66 through the Southwest, avoiding the more direct route through the Rocky Mountains.

As a whole, it was a fairly uneventful trip. For most of the ride, the woman slept in the backseat as the two drivers continued to push westward. The three sang songs together – mostly church hymns – and the driver in the passenger seat was asked to read aloud passages from the Bible.

Three motel stops were made: in Joplin, Missouri, Albuquerque, New Mexico, and Needles, California so that their passenger could get some rest, but she would only sleep briefly and then ask to get back on the road. Another brief stop was made in Vega, Texas so that a doctor could treat the mystery woman for a minor illness.

By this time, the wire services had spread the story to newspapers nationwide. Just who was this unidentified woman? Where in San Francisco was she headed? Why did she choose such a slow, expensive method to cross the country? While readers pondered over this bizarre mystery, the cab continued along its journey to California.

One of those readers was a real estate agent named George Kehriotis, who resided at 636 35th Street in Richmond, California. Richmond is about 13 miles (21 km) northeast of San Francisco as the crow flies. Imagine his surprise as the Black and White taxicab that he had been reading about in the newspaper stopped right in front of his door at 6:55 AM on Monday, April 25, 1966. While the press reported that the entire trip had taken 80 hours, my calculations come up with a little under 85 hours or 3 days and 13 hours.

Kehriotis immediately recognized the woman, but would not reveal anything specific about her to the press. All he would say was that she was in her mid-50’s, the spouse of his wife’s uncle, had visited the Kehriotis home two years prior, and was involved in a legal battle with her husband’s family. Kehriotis stated, “She is exhausted and sleeping. She’s a very charming woman.”

Driver Mertz commented, “The trip in the cab with Ohio plates created considerable excitement, especially in the small towns. People looked at us as if we were nuts.” He continued, “and cops and highway patrolmen kept stopping us, asking to see our papers. When they found them in order, they said, ‘OK, you can go and good luck.’”

And with that, the remainder of the fare was paid and the two drivers began their long trek back to Toledo. Respecting their passenger’s privacy, they continued to remain silent as to her identity.

By the end of the day of her arrival, the San Francisco Examiner revealed that one of the drivers had registered their passenger at one of the motels along the way as “Mrs. Mary Matz, of Hammond, Indiana.” With her identity now revealed, 48-year-old Mrs. Matz agreed to an interview with the press. She was the fourth wife of 85-year-old Henry W. Matz, a retired Chicago funeral home director who was in poor health.

According to Henry’s son Clarence, the couple had separated five or six weeks prior. The elder Matz had recently been hospitalized, but had since been released and was staying with his son in Chicago.

After Mrs. Matz had a huge falling out with her husband’s family, she headed out west to the Kehriotis home because they were “the only relatives who’ve been nice to me.”

When questioned as to why she didn’t travel via a train or airplane, she said that it was for “health” reasons. Mrs. Matz explained that she feared becoming ill along the route. A taxi could stop at any point along the way, while a plane or train could not.

As to when she would be returning home, she couldn’t answer that question. Mrs. Matz indicated that would depend on when her doctor gave her the okay.

After a few days in the spotlight, Mrs. Matz would disappear from the headlines. According to her husband’s death certificate, she was still married to him when he passed away on June 16, 1969, but I was unable to find out what happened to Mary Matz afterward. If anyone knows, please let me know. 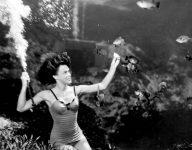 Can fish and other aquatic animals help predict earthquakes? Dr. Shinkiski Hatai provided evidence on their strange behavior during a talk in 1933. 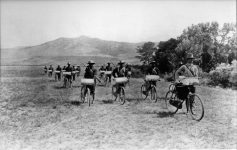 The US Army Bicycle Corps – Podcast #20

It's hard to believe, but the United States Army once had a bicycle corps. Were their tests a success?