Let me introduce you to someone that I would consider to be a great biology teacher: Miss Rose Freistater. She studied hard, passed all of the exams required at the time for a teaching license, and was very well-liked by fellow teachers, administrators, and students.

For three years, she served as a substitute teacher at the James Monroe High School in the Bronx.  The chairman of the biology department, Mr. George C. Wood, gave her a glowing letter of recommendation: “It is with a distinct sense of satisfaction that I am able to recommend her to any position or work to which she may be assigned by her superiors.”

In other words, Rose Freistater was everything one would want in a qualified teacher.  In fact, no one ever questioned her qualifications for the job. Everyone agreed that she excellent at what she did. So, you may be surprised to hear that the board of examiners for the New York City Board of Education denied her a teaching license.

Very simple.  Rose was overweight.  Today this would not be a valid reason, but this was way back in 1931 when teachers were fired for the most absurd things like being too beautiful, having a child, smoking cigarettes, consuming an alcoholic beverage, or speaking out against the Ku Klux Klan.  Rose stood 5-feet, two-inches tall, and weighed 182 pounds (or about 157 cm and 83 kilograms). Under the board rules at the time, someone of her height needed to weigh under 150 pounds or 68 kilograms to receive a teaching certificate.

You are probably wondering what rationale the board of education could possibly have to justify such a policy.  Well, they offered up several reasons.

First, they considered overweight teachers to be a pension risk. The argument was that the heavier a teacher was, the more likely that person was to retire at a younger age and become a greater drain on the pension fund.

Oddly, once someone was granted their teaching license, the board never checked their weight again.

Next, they stated, “Teachers must climb stairs, take part in fire drills, and to be able to handle all real school emergencies.  Overweight teachers are less likely to stand the strain of teaching.”

And lastly, and this is the really scary part, they felt that overweight teachers were not proper role models for students “from an esthetic point of view.”

Did any of these points really carry much weight with the public?  Not really.  The board had made its decision and were adamant in their stance.  They weren’t budging.

They did, however, agree to allow Rose an additional six months to get her weight down to the 150-pound maximum. Clearly, she was unable to meet that goal. If she had, there would probably be no story to tell. Instead, the board received a letter from Rose that she was only to shed 22 of the 32 pounds that she needed to lose. Rose explained that her mom had fallen ill and that prevented her from devoting her entire attention to her weight loss.

The board refused to grant her an extension.  It turns out that they had been denying teaching licenses to both underweight and overweight teachers for the previous ten years, so this was nothing new. Nearly all of the teachers either gained or lost the mandated weight during the six-month grace period or simply let their certification application slide.

Let’s move forward to May of 1935 after Rose had completed several years of substitute teaching.  Rose decided that she was going to be the one to challenge this unjust policy. 26-year-old Rose opted to appeal to the head honcho up in Albany: the New York State Commissioner of Education.

Needless to say, the press had a field day with this story.  It went national almost instantaneously.

A reporter for the New York Times approached various faculty members of the Teachers College at Columbia University to get their thoughts on this question: “Do you think that in the teaching profession efficiency decreases in inverse proportion to mass?”

To which Professor N.L. Englehardt replied “If you mean do I think that the fatter a teacher is, the more inefficient he is, I do not.  The fattest man I ever knew – President Taft – was also the best teacher I ever knew.”

Dr. Fannie W. Dunn commented, “The teacher teaches with the brain, which is the seat of learning and of personality.”  She continued, “There are good fat teachers and good thin teachers and bad teachers of both types.”

My favorite response was from Professor Dr. George S. Counts: While he understood the board of education’s concern over the risks for hiring heavier teachers, he stated, “But I think for the good of the children, teachers should die young, so fat teachers have the best of it.  Aside from that, the matter of weight is entirely irrelevant to the question of efficiency in the classroom.”  I detect a bit of sarcasm in his reply.

Charles Brownell, a health education professor took the opposite stance.  “The teacher should represent in body and mind everything that the child should want to become.  Overweight is a defect, similar to any orthopedic defect, and should be classed as such.”

In the meantime, Rose’s weight returned back to the 180-pounds it was before. In an effort to lose the 30-pounds by August 28th, the day she was scheduled to appear before the state commissioner, she enrolled in a field course at the Cornell Summer School in Ithaca, NY.  For six weeks she rode horseback, hiked ten miles (16- km), and played tennis each day.

So how much weight did she lose from all of this exercise?  None.  Zilch.  Nada.  Instead, she decided to just stop trying. “I am not going to ruin my health trying to get thin to teach New York City school children.”

Her dad commented to a reporter, “She’s a sturdy, solidly built girl and it would be dangerous to her health to reduce.”  It was also pointed out that her family was “long-lived” and that Rose was able to walk up five flights of stairs to their apartment at 1995 Davidson Avenue each and every day without any problem.

From what I was able to piece together from the various news accounts, that August 28th hearing did not occur because Rose lacked proper legal counsel.  She secured the services of attorney Harry Mabel and a new appeal was filed on October 15th with a hearing date scheduled for Wednesday, December 11th.

And it was on that day that a new Rose Freistater was revealed to the world.  She walked into the hearing weighing a svelte 154-pounds, just four pounds over the board of education’s limit and that was with all her clothes on.

How did she do it?  Through a combination of diet, exercise, and massage, all done under the guidance of her physician, Dr. Gerald Schuman.  The massage probably did little to reduce her weight, but an article in the December 17th issue of the Washington Post detailed her diet.  While she wasn’t living on air, it was very clear that Rose has severely restricted her caloric intake to reduce her weight.

While comparison pictures of Rose before and after the weight loss were printed in the newspapers to, let’s face it, sell more papers, what happened during the proceedings of the hearing was more important to Rose.

Her attorney, Mr. Mabel, argued that New York City’s Board of Examiners had overstepped their bounds in specifying the physical qualifications for teaching candidates.  Only the Board of Education on the recommendation of the Board of Superintendents had the authority to set any such policies.

Of course, the attorney representing New York City stuck to the original argument that Rose Freistater was simply a health risk to the pension system.

In the end, Rose’s fight was for nothing.  On March 13, 1936, Education Commissioner Frank P. Graves dismissed the appeal on a technicality.  Basically, Rose was given thirty days to appeal the board of education’s original decision, but she took nearly four years to file an appeal.  “The only reason advanced for this delay is her ignorance of her right to appeal.  Under the circumstances, this not sufficient cause.”

Rose was once again in the news in late-July of 1937.  This time it was not for anything that she had done since her appeal was denied. Instead, the NYC Board of Education had received an application from 23-year-old Joseph P. McDonald to become a health teacher.  He stood 6 feet, 2 inches (188 cm) tall, and tipped the scales at 287-pounds (130-kg).  So what did the board decide to do after the Rose Freistater fiasco?  They granted him a teaching license after being told that he was the “perfect physical specimen.”

My wife Mary Jane joins me to review the classic movie "Sunset Boulevard." Directed by Billy Wilder, this movie tells the story of a struggling screenwriter who gets into a dangerous relationship with a faded Hollywood actress who dreams of a big comeback. 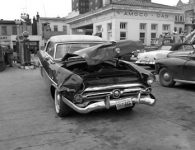 A parakeet was blamed for a car accident that destroyed a brand-new police car.