James Sharpless may have been a great engineering student, but he wasn’t what one would consider a sharp-dressed man. When he set out from his home at 12234 Santa Fe Avenue in Lynwood, California for his classes on Friday, November 5, 1954, his wife strongly objected to the necktie he chose to wear. That’s because it was bright coral in color.

“She thought it was a little bright to wear to school,” he later recalled.

Yet, he opted to wear the tie anyway.

Upon his arrival for his 9 AM class at the University of Southern California (USC), a fellow student noted that there was something very peculiar about the tie.

“Hey, what happened to your tie? Take a look at it.”

And that was exactly what Sharpless did.  He was surprised to see that his rayon knit tie had changed color.  It was now a bluish-purple color.

What was most interesting was that any part of the tie that had not been exposed to the air – that included the fabric that made up the knot and the portion hidden by his tie clip − had retained its original coral color.

The tie ended up in the hands of Dr. Joseph Smatko, who was the head of USC’s chemical engineering department.  After an initial examination, he theorized that “some oxidizing substances resulting from ozone and other components in contaminated air probably caused the change in color.”

While a color-changing tie would be a mere curiosity to most people, Smatko wished to do tests on the tie to determine the chemical composition of both the dye and the compound in the air that caused the color change.

And just what were the results of Smatko’s testing?  The newspapers never followed up on the story, so that still remains a mystery.

The true story of Karl von Cosel and the girl of his dreams. They slept together in the same bed every night - nine years after she had died. 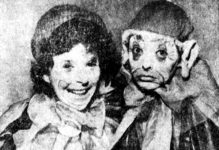 Ringling Brothers and Barnum & Bailey Circus turned down Bri Murphy and Kay Mitchell's desire to work as clowns. They found another solution.