(This article originally appeared on page 2 of the January 19, 1967 publication of the Indianapolis News and is reprinted word-for-word below.)

CALGARY, Alberta (AP) — Richard Irving Clark, owner of a Calgary auto body shop, went to his bank to withdraw $10 yesterday but made an unlucky choice of withdrawal slips.

Clark, 48, filled out the slip and took it to a teller. On the back she found a note: ‘This is a stickup. Empty the till.”

The teller went to another employe who pressed a button summoning police. Meanwhile Clark took the slip to another teller who didn’t see the note on the back and gave him his $10.

As Clark left the bank, police followed him and picked him up. After questioning him for three hours, they released him and a spokesman said: “Some clown must have written the note.”

Returning to his car from the police station, Clark found it had been towed away for overtime parking. But when he explained what had happened, he didn’t have to pay to get it back. 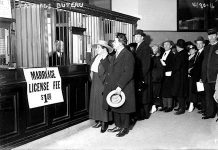 In 1935, Josephine Morgan got out of her car and was knocked unconscious in a very unusual way.