Mary S. McDowell started working for the New York City school system on January 29, 1905, and was considered by all to be a great teacher. She taught Latin, English, and patriotism at the Manual Training School in Brooklyn and everything seemed to be going great until the outbreak of World War I.

All teachers in public schools were required by law – the so-called Lusk laws – to sign a loyalty pledge to demonstrate their patriotism and support of democracy. But Miss McDowell refused to sign the pledge because she was a Quaker and her religious beliefs prevented her from taking any part in the war effort.

Fellow teachers reported her refusal to the Board of Education, where she was brought up on charges of “conduct unbecoming of a teacher.” On June 19, 1918, in a 4-0 ruling, the board terminated her employment.

For the remainder of the war, she was unable to find suitable work. When the war ended, the Lusk laws were repealed and in June of 1923 the Board of Education agreed to reconsider her case. On July 11, 1923 they unanimously agreed to reinstate Miss McDowell to her position at Manual Training High School. 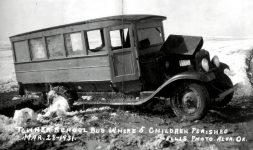 The sad, yet true, story of a 1931 school bus disaster in the Pleasant Hill school district in Colorado.