Women with Children Banned from Teaching

On November 29, 1911, the New York City Board of Education barred four young teachers from the classroom because their young children had caused them to be absent from school far too many times.

As a result, a new policy was put into place that forbid women with young children from being teachers in the New York City school system.  Should a woman have a child while employed by the district, she was given only two options: 1) Resign from her position or 2) be fired.  If a woman chose to resign, she could apply to be rehired once her children had grown.  If she opted to let the Board of Education terminate her employment, then she could never work for the NYC school system again.

It was pointed out in the article that it was the policy of the school board to never hire married female teachers, unless their husbands were mentally or physically unable to support them.  They could marry after being hired, but clearly could not retain the position after giving birth to a child.

Chairman of the Elementary Schools Committee, Abraham Stern stated “A married woman’s proper sphere is the home, if she has a family.  A woman who has infant children to rear has no business trying to take care of these and at the same time teach school.”

He continued, “A mother places her children first, just as the Board of Education places first the children it provides for.” 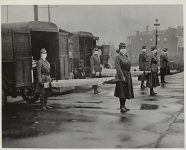 In 1918, Dr. George F. Baer claimed to have an influenza cure that was made with creosote and iodine.