For today’s story on pachyderm poisoning titled the Great Elephant Caper, let us turn the hands of time back to November 6, 1941, and take a visit to Atlanta, Georgia.

Here we learn that fifteen of the fifty-two elephants owned by the Ringling Brothers, Barnum & Bailey Circus were stricken by a strange, unknown malady.

Two died the first day, four on the second, and eleven within a week. These were among the circus’s best elephants and were reported as a $125,000 loss (over $1.8 million in today’s currency) – a big chunk of change.

An autopsy was immediately performed on four of the elephants. It was later determined by the Georgia state biochemist that each elephant had more than enough arsenic in its blood to kill them. Circus officials were unable to explain how the arsenic ended up in the elephant’s food.

It was clear to all involved in the investigation that the elephants were murdered. Police questioned drug stores in the previous three cities that the circus had performed to see if they could identify the person that purchased large quantities of arsenic. A private investigator hired by Ringling Bothers concluded that it had to be done by someone familiar with the circus.

The story became a national sensation. Day after day updates were provided for readers. An 8-year-old boy named Francis Thomson became so upset that he sent a dime into the Richmond Times-Dispatch to establish a fund for the purchase of new elephants.

There was an eight-state manhunt for the elephant murderer. The big break in the case came on November 17, 1941, when 32-year-old Elwin Bolgen Michael of Des Moines, Iowa was arrested by St. Petersburg police after two witnesses came forward.

They had been watching the erection of the tents in Charlotte NC on Sunday, November 2nd, and saw Michael reach in his pocket and pull out five large white capsules – each about an inch long and the thickness of your finger – and observed him feed them to a large elephant. Michael had just been hired on June 18th by the circus as a wheeler – part of the crew that helps load and unload the circs from the trains.

The witnesses had been taken to the fairgrounds to observe all 225 loaders and both identified Michael as the man that they saw.

A third witness then came forward and claimed that Michael had been “run out of the bull tent several times”.

Police then determined that inquiries for fifty arsenic tablets had been made at a Danville, Virginia pharmacy. The man that sought to make this purchase was similar in description to the suspect Michael.

Michael immediately claimed his innocence. He said that he was in a Charleston theater watching the movie Robin Hood. Detectives found a newspaper clipping about the death of the elephants in Michael’s possession.

Police continued to grill Michael. They were sure they had the right man and were determined to nail him against the wall for such a gruesome crime against innocent animals.

Then the case started to unravel. Two of the witnesses gave different descriptions of the clothes that Michael was wearing at the time of the feeding of the pills. The third witness could not identify Michael in a police lineup.

On top of that, the pharmacist in Danville, Virginia said that a different man had purchased the fifty arsenic tablets.

Lastly, the death of the elephants also coincided with the untimely death of four circus employees. Four others were violently ill.

After eleven days in custody, police were forced to release Michael for a lack of evidence. All charges were eventually dropped.

In the end, animal experts became increasingly convinced that the elephants were poisoned by arsenic that had been accidentally dumped onto the circus lot.

It turns out that this was not the first time that this had happened. Eleven elephants had become ill in Charlotte, North Carolina eight years earlier after grazing in a lot contaminated by seepage from an industrial plant. The circus had played the same lot the previous Tuesday.

The hides of the eleven poisoned elephants were sold to the Sterling Leather Works to be tanned and made into luggage.

As many people know, this was not the end of tragedy for the circus. A fire occurred less than a year later in their circus menagerie tent on August 3, 1942. That fire killed 45 animals including 13 camels, 9 zebras, 5 lions, 4 elephants, and a number of other assorted circus animals.

And then there is the famous July 6, 1944 fire in Hartford Connecticut that killed 168 people. Both of these fires were due to the fact that the circus tents were waterproofed with paraffin wax dissolved in gasoline – a very common mixture back then, but clearly no longer used.

Both fires are best left for future podcasts.

Akron, Ohio citizen Larry Bader and Omaha sportscaster Fritz Johnson were complete opposites. Yet, they were dead ringers for each other. 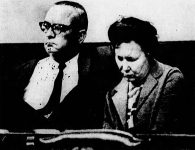