On December 10th of 1936, Oscar Allred caught a mouse at the Chicago Industrial Home for Children in Woodstock, Illinois. While transferring it from a fruit jar to a cage the next day, the mouse made a run for it and escaped.

He quickly locked up the cat and searched for the mouse, but he had no luck. On Saturday night, he quickly summoned the superintendent of the home, Herbert C. Gensch, to the kitchen for help in rounding up his furry friend.

The two grown men chased the mouse all around the kitchen until, suddenly, Mr. Gensch blurted out, “Help! I’ve got the little pest.” To which Mr. Allred replied, “What do you mean, you’ve got it?”

It didn’t take him long to figure out what had happened. The mouse had run up Mr. Gensch’s right shirt sleeve all the way up to his armpit.

I can’t speak for anyone else, but that is not the place that I would want a wild house mouse to be running around.

Mr. Gensch quickly raised his right arm up in the air while he stuck his left hand into his shirt in search of the panicked mouse. He couldn’t grab it. The mouse then fell down within his shirt to his waistline and started running round and round. Mr. Gensch was not a happy camper and started to squirm before yelling, “Do you think that I want to get bitten?”

Mr. Allred immediately replied, “It isn’t a biting mouse; it’s a singing mouse.” As if a mouse that could sing would never bite someone…

The fruit jar was grabbed and placed in front of Mr. Gensch’s shirt to capture the mouse. As soon as he was secured, the mouse was immediately transferred into the wire cage. He was once again the prisoner of the big, bad humans.

That bit about a singing mouse was no joke. The mouse really could sing. “It starts with a soft whirling trill, the chirps coming so close together that they provide a continuous tone. This grows louder to an intensive crescendo and then jumps two notes higher for another crescendo.”

So, what would you name your singing mouse? Old Blue Eyes wasn’t a big star in 1936, so calling him Frankie or Sinatra wouldn’t have crossed their minds. Instead, they chose to name their singing mouse after the most famous mouse in the world. Yes, he was now Mickey the singing mouse.

Mickey performed publicly for the first time the morning after his capture. 43 residents of the children’s home all sat quietly through breakfast as Mickey belted out a steady stream of musical chirps. A star was born.

But, by that afternoon, the music had stopped. His adoring public was now in a panic. Was Mickey to ever sing again?

Robert Bean, the assistant director of the Brookfield Zoo made a visit to see Mickey that Tuesday, with the intent of purchasing him, but no deal could be made. He felt that the price was too high for the zoo. Mr. Gensch claimed that someone else had already offered $100 (about $1600 today) for Mickey, and let’s face it, no one is going to pay that much for a singing mouse that doesn’t sing.

But there was an even bigger problem facing Mr. Allred and Mr. Gensch. Mickey was scheduled to appear the next day on the Chicago Jamboree show, which was to be broadcast on WENR radio, an NBC station, from 9:30 to 10 PM. If he didn’t sing then, Mickey’s career was over.

Luck was on their side. Mickey resumed singing that day and appeared ready for his debut before his adoring public. 300 fans packed the studio of the radio station to hear the amazing soprano sing.

Announcer Don McNeil explained to the radio audience that this would be a historic day. Never before in the short history of radio had a mouse sang over the airwaves. But, just to be cautious, he did warn at the outset of the show that there was no way to be certain that the mouse would sing.

A microphone was held close to the cage and boy did that mouse roar! His fine voice was clearly heard by all those listening. Then the orchestra joined in and Mickey once again sang.

Announcer McNeil then thanked “Mickey, the mouse.” That’s when Mr. Gensch chimed in and said, “I beg your pardon, but Mr. Bean of Brookfield was out to see the mouse, and says that she is Minnie.” That’s right. Mickey was not a he. He was a she. Minnie was a typical house mouse that was about two-thirds grown. Some compared her warbling to that of cooing lovebirds, canaries, and meadow larks, while others thought she sounded more like the sound of birds in the early morning. Or possibly a chirping cricket.

No matter what she sounded like, the reviews in the papers the next day were glowing. The Chicago Daily News said “Singing Mouse Scores Triumph in Radio Debut”, while the Hartford Courant’s headline was “Minnie, Singing Mouse, Runs Away with Show.”

What was most revealing in these stories was that Minnie didn’t sing for pleasure. One could say that they were more like cries of duress. As news cameras flashed away after the show in the waiting room, Mr. Allred explained, “She sings when she is disturbed. See this little wire? I simply prodded her with it when she was announced, and I don’t think I’ve ever heard her sing better.”

The story and Minnie’s picture made the news wires and she became an instant celebrity. It was reported that fan mail started to pour in after her debut – all three pieces of it. One of those letters was opened with great trepidation because it was from the New York Society for the Prevention of Cruelty to Animals. Their fear that the SPCA would be outraged over the poking of an innocent animal with a wire was quickly calmed upon opening the envelope. Inside was a letter of congratulations and included a pamphlet on the proper care of pet mice.

Santa didn’t forget Minnie on Christmas of 1936. Under the tree that morning was a brand new cage with glass sides. In addition, a place of honor was reserved for her at the head of the school’s Christmas dinner table, where she was asked to sing for the boys. Hopefully, she thanked them with a Christmas carol.

Behind the scenes, Minnie’s newfound fame caused quite the stir among church officials. The Free Methodist Church operated the children’s home, and they objected to all of the attention that Minnie was bringing to their institution. Mr. Gensch told the press, “Our folks don’t object to Minnie – in fact, all the children and the supervisors at the home have gotten awfully fond of her and hate to give her up.” He continued, “But our church is opposed to theaters.”

It was ultimately decided that the church had to turn the care of Minnie over to another organization. The Woodstock Civic Club was chosen to manage Minnie’s career. Her new keeper was club member Dwight L. Lichty. It was quite a sweetheart of a deal for the church. They no longer had to care for the mouse or deal with bookings, contracts, and transportation, yet still got to keep most of the profits.

The Civic Club followed through with their part of the bargain and secured Minnie a national radio contract with NBC. Her first appearance as part of the deal was to appear on the National Barn Dance on January 30th of 1937. Minnie was to get $500 ($8100 today) if she sang on the show or $250 if she failed to utter a single note. I was unable to locate any reviews of her performance that night, but the fact that she was paid the full $500 speaks volumes.

Minnie’s success quickly spawned a large number of imitators all trying to cash in the singing mouse phenomenon. Bloomington, Illinois had their own Mickey, Massachusetts had offered up Mitzi, Tiny Tim performed benefit concerts for hospitalized children in Garner, Iowa, a “he-mouse” who sang bass was found at the Zeta Tau Alpha sorority at Northwestern University, and a singing mouse was paired up with a singing canary in Linton, Indiana. Singing mice just seemed to be popping up just about everywhere. Even I’ve heard mice singing, if you can call it that, as my late cat Farnsworth chased the occasional mouse around our old home.

And that’s when the marketing guys at NBC decided that it was time to cash in on Minnie’s fame. They decided to hold a series of contests to determine which singing mouse was the greatest of all. The winning mouse from contests in England and Canada would compete against the US grand champion in the ultimate singing smackdown.

The caption on a March 31, 1937 NBC press photo showing some of the contestants read as follows: “MOUSICAL AUDITION ‘T’wasn’t the night before Christmas, but all through the NBC broadcasting stations no creatures were stirring except for the mouse. And the mice were singing plenty! Here are some of the mice auditioned for the title of ‘America’s best singing mouse.’ The final decision will be given by eminent musical judges on Sunday, April 11, when the mice ‘sing’ over the NBC-Blue Network from 3:45 to 4:00 p.m., EST. The best American mouse will meet the British champion in an international broadcast for the World’s Championship. Peggy, NBC’s mousical instructor, is coaching the rodents.”

I honestly have no clue who Peggy was, but I can tell you that one of the judges to choose the American winner was Mickey and Minnie’s cartoon creator, Walt Disney, himself. They chose a silver-gray mouse named Mikey Brown. He, along with world favorite Minnie, was scheduled to go up against the English champion Mickey and the Canadian winner Johnny.

And the winner of the World Championship, the best singing mouse in the world was… Drumroll, please… Sadly, just like you, I don’t know who won. I searched for hours through the newspaper and magazine archives trying to find an answer, but no one seemed to follow up on the story. Singing mice just seemed to suddenly fall out of favor with the public.

The sad news came on October 26, 1938, that Minnie had passed on from what was presumed to be old age. Minnie was survived by seven litters and numerous grandchildren.

On Tuesday, November 1, 1938, the Chicago Jamboree, the same show on which she had made the first of her four radio performances, eulogized Minnie followed by a few moments of silence. 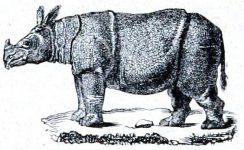 In October of 1959, it was reported that a female rhinoceros named Cacareco had won the San Paolo municipal council election in a landslide.

In 1952, Jesse Garrett had recently divorced and was in search of a new wife. He seemed like a catch and hundreds of women contacted him to let them know that they were interested. In the end, Jesse Garrett was financially ruined.