In April of 1938, eleven-year-old Earl Baker, a resident of Coatesville, Pennsylvania, decided to make a daring leap onto a moving freight train. He was not successful and lost his right leg as a result.

Earl’s mom was a widow who struggled to feed her nine children, so there was no way that she could afford to buy him an artificial limb. The $250 price tag, which would be over $4,000 today, was far out of reach.

But Earl did have some hope. A stranger informed him that if he could gather up 50,000 matchbox covers, he could trade them in for a prosthetic leg. Earl started to collect the covers but soon found out that he had been hoaxed. The matchbox covers were essentially worthless.

That’s when Mayor A.P. Bergstrom announced that anyone willing to help could stop by the municipal offices and make a donation toward the purchase of a new leg for Earl.

Within one week, the citizens of Coatesville contributed $379.90. Then, on Christmas day of 1938, Earl was presented with his new leg. The remainder of the funds raised was placed in a trust fund to help pay for repairs and replacement of the leg when needed.

56-year-old Gretna, Louisiana resident Sidney Landry had terrible stomach pains and opted to remove a portion of his colon with a penknife. 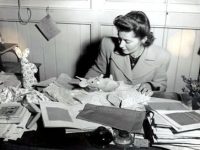 In 1906, Miss Mana E. Hall was forced to resign from her teaching position after it was discovered that she was married.