Today’s story is about Ann Cooper Hewitt, a woman that was born into extreme wealth and managed to grab the headlines from practically the day she was born until she died.

Ann’s dad was Peter Cooper Hewitt.  He was a self-made millionaire who had numerous inventions including the mercury arc lamp, a precursor to the modern fluorescent lights.  His father Abram Hewitt was once the mayor of New York City.  His grandfather was Peter Cooper, the wealthy industrialist who built the first US steam locomotive Tom Thumb, founded Cooper Union school in NYC, and more importantly in my book, he invented instant gelatin –more commonly known as Jell-O.

Mom was born Maryon Andrews, reportedly to a southern family, but only of minor wealth and prominence in society.  She had been married twice before meeting Peter Cooper Hewitt.

Dad was much older than mom and died on August 25, 1921.  His estate was estimated at around $10 million in value – a combination of the money he had earned and the large trust that he had from his grandfather.  His will specified that the bulk of this fortune be equally split between his wife Maryon and daughter Ann.  If mom remarried, her share would be cut in half and go to Ann.  $1,000 per month was set aside for the upbringing of Ann until she was of age, which was a huge chunk of money back in 1921. If Ann died childless, all the money would go to her mom Maryon, if she was still alive.

Ann’s name first started appearing in the papers in 1922 shortly after his death.  Her mother petitioned the courts for an increase in her daughter’s allowance from her deceased husband’s estate.  Maryon felt that the $1,000 per month was insufficient.  The court agreed and Little Ann’s allowance was increased by $23,000 to $35,000 per year.

It didn’t take long for relatives to voice their objections.  Peter Cooper Hewitt’s brothers and sisters argued that Ann was illegitimate and not entitled to a penny.  Being born four years prior to the couple’s marriage in 1918, they attempted to prove that the marriage was illegal and that Ann was nothing more than a “Love Child”.

The case was filed in court by the trustees of the fund established in Peter Cooper’s will for Peter Cooper Hewitt.  They basically wanted the court to determine if Ann and her mom Maryon were the legal heirs to his estate and settle the case once and for all.

What proof did they have of an illegal marriage?  It turns out that mom had been married twice before marrying Peter Cooper Hewitt.  Her first husband was a wealthy Californian named Dr. Pedar de Bruguiere, from whom she received a quickie divorce in Reno.

Maryon second husband was a wealthy Wall Street guy named Stewart Denning.  Denning was able to get that marriage annulled in 1910 on the grounds that there was something fishy about her divorce from de Breguiere.  If his claim about the Reno divorce was true, then she was still technically married to her first husband de Bruguiere.  That also meant that her marriage to Hewitt was illegal and that meant no money for her or her daughter Ann.

While the courts were trying to straighten out this tangled matrimonial mess, mom wasted no time in finding husband #4.  Maryon was courted by Baron Robert d’Erlanger and the Shah of Persia (which is now Iran) to head his harem.  Maryon opted to become a baroness.

Before we get back to the court case, I should also mention that by the end of 1926, mom had divorced the Baron because he had admired other women, if you know what I mean.  Maryon then married once again to husband #5 – a prominent New Jersey lawyer named George McCarter.   She claimed to be 39 years old at the time but based on my calculations she was 42.  As you could probably guess, her marriage to McCarter also ended in divorce.

So let’s get back to the question about who would receive Peter Cooper Hewitt’s fortune.  On May 1, 1925, the court ruled in favor of Ann and her mom.  The decision was appealed, but on January 5, 1927, the Appellate Division of the Supreme Court affirmed the decision without opinion.  Ann Cooper was the legitimate daughter of Peter Cooper Hewitt and was entitled to everything that both her father’s and grandfather’s estates set forth.

This was quite the sensational story in its day, with full-page stories appearing in the media.  Both mom Maryon and daughter Ann became minor celebrities, a lot like the Paris Hilton’s of today.  Yet, this was nothing compared to the scandalous trial that was about to come.  It was one so shocking that would shake the very foundation of America’s high society.

The first thing that you needed to do back then was to get a doctor to show that someone is mentally deficient.  Mom was able to accomplish this task by taking Ann to see a state psychologist in San Francisco on August 14, 1934.  These mental tests showed that Ann, who was twenty at the time, only had a mental age of eleven and was “feeble-minded”.  It did not matter that previous tests in New Jersey found Ann to be just fine.

Next, you need to trick the person into getting surgery.  Four days after the mental exam, Ann was taken to San Francisco’s Dante Sanatorium, apparently suffering from appendicitis.  On the recommendation of mom’s physician and at the mother’s request, the decision was made to have Ann sterilized at the same time.  While Ann had no knowledge at the time that this was being done, they had no problem billing her portion of the estate for the $9,000 medical bill.

How Ann came to learn that she had been duped was never revealed.  It is important to note that the alleged sterilization occurred eleven months before she was to turn twenty-one and would be free to marry.  This was perceived as a way for the mother Maryon to gain tighter control over Ann’s portion of the estate.   Remember that if Ann died childless, her mom got everything.

The press had a field day with this one and the war of words between the two sides began.

Ann accused her mother of neglect and abuse.  She labeled her mother an adventuress that had multiple husbands and many other lovers.  She partied hard, drank heavily, and supposedly squandered away a portion of Ann’s fortune in gambling and high living.

She also claimed that her mother locked her up, deprived her of a proper education, and was never allowed to have friends or boyfriends.   It was also brought to light that mom was not from the southern aristocracy that she had so long claimed.  Instead, Maryon was the daughter of a poor horse cab driver in San Francisco.

Mom and her team of lawyers fired back that all of the accusations were false, except for the sterilization.  She claimed to have lavished her daughter in a life of luxury and had fought tooth and nail to establish her daughter’s legitimacy so that she could rightfully receive her chunk of her dad’s estate.  Ann was supposedly sent to the best schools but had been thrown out for various scandalous reasons.  Maryon said that Ann “is a moron, running around with morons” and that she had her sterilized “to prevent the birth of a lot of moronic children”.  Ouch…

But then things turned really sour.  The police got involved.  Mom and the two doctors involved were arrested and released on bail.  All three were charged with Mayhem, which at the time was defined under California law as anyone who “unlawfully and maliciously deprives a human being of a member of his body, or disables, disfigures or renders it useless”.  Sterilization definitely falls under this description.  The penalty, if found guilty, was 1 to 14 years imprisonment.

But the case never got that far.  The various lawsuits were settled out of court.  The two doctors were placed on trial, but the judge ultimately dismissed the charges against the two doctors for lack of evidence.  In the eyes of the law, Ann was still considered a minor and therefore her mother had the right to act in what she felt was the best interest of her daughter.

Mom, on the other hand, never made it to trial.  Due to the notoriety of the case, she went into hiding.  A warrant was issued for her arrest and Maryon was located a week later in a New Jersey hospital recovering from an attempted suicide.  Ann refused to testify against her mother and the charges were dropped.  I guess it was one thing to sue her for money, but a whole different animal to try to put her in jail.

Maryon died in 1939 at age fifty-five alone, broke, and living in a one-room apartment in NYC.

Her fourth marriage to disk jockey Frank “Rodeo Roy” Nicholson would grab her big headlines once again.  On the eve of their elopement in 1947, Nicholson’s first wife granted him a divorce and was found dead several hours later.  Nicholson admitted to sitting outside her house while her body was taken away in an ambulance but said he had nothing to do with it.  Although never explicitly stated, the various news articles were written in such a way to lead one to believe that the couple had bumped off the first Mrs. Nicholson.

Two weeks later her death was determined to be a suicide, but the newlyweds found themselves in further legal hot water.   The couple was charged with criminal conspiracy in an attempt to bypass California’s pre-marital blood test law and placed on trial.  The jury was unable to reach a verdict, but it was later determined that they had given false testimony on the witness stand.  A second trial was held, and both were convicted of perjury.  Their fine was $1,000.

Two years after the trial ended, Rodeo Roy announced that his wife Ann was running for the US Senate seat in Nevada “to fight communism and help fix things up for the kids”.  It was an odd announcement because Rodeo Roy said he would manage his wife’s campaign on the Republican ticket but wouldn’t vote for her.  He was voting for the Democratic candidate instead.  Her campaign never went much further than grabbing headlines.

In 1956, at the age of forty years, Ann died from cancer.  Her entire fortune was left to her husband Rodeo Roy, who died a little over one year later. 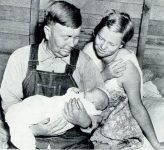 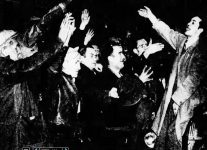 Joe Bonavita went to the Bowery in 1946 to give away a big chunk of his hard-earned money to those less fortunate. The true story about an unusual Santa Claus.