Once upon a time, there was a frog named Tinker who dreamed of becoming a handsome prince. All he needed was that one kiss from a beautiful princess. If only the frog in today’s story was to have been so lucky. Instead, this frog was buried in wet cement.

So starts the story of Tinker the Toad. The exact date that Tinker was entombed in his concrete prison is unrecorded but has been estimated to be at some time during the year 1941. This was when workmen poured the new 6-inch (about 15 cm) thick floor of a hanger at Tinker Air Force base just outside of Oklahoma City, Oklahoma.

Fast forward to Wednesday, June 21, 1950, some nine years later. A pipefitter named Eugene Meadows was digging through the concrete floor to repair a damaged airline. After breaking through the concrete, he hit solid dirt and a big surprise awaited him. There he found a very pale amphibian, possibly a frog or a toad, that had been buried alive when the floor was first poured. Even more shocking was that the faded amphibian appeared to be alive.

Describing his discovery, he was quoted as saying “There was no air pocket – just solid dirt around him.” Naturally, he picked up the toad and took him home to see what would happen. His four kids must have been thrilled. Tinker was placed in a tub of damp soil in his basement to begin the recovery process.

News quickly spread around the world about this incredible discovery. But the real question was whether or not Tinker would survive or not. By the next day, the weak toad was reported to have made his first croak. The Meadows family took this as a good sign that Tinker was back on the road to good health.

By the next day, it was reported in newspapers across the country that Tinker had made his first croak in nine years, albeit an incredibly weak one. He still refused the food and water provided to him, so concern about his health continued.

On the 24th, three days after Tinker’s return to life, the press reported that it was all one big fraud. Well, maybe fraud is too much of an accusatory term for what is believed to have happened. It wasn’t that Eugene Meadows was lying or exaggerating what he felt to be the facts, it was more like he was fooled into thinking that Tinker had been in some sort of state of suspended animation when he had not.

A University of Oklahoma herpetologist named Dr. Arthur Bragg stated that he was quite certain that Tinker was not that old. There was just no possible way that any frog or toad could have survived for nine years without food or water. Instead, he proposed the following scenario as to what most likely happened” Probably a month or two before his unearthing, Tinker was lying on the runway at the Air Force Base. The sun beat down on the surface and Tinker sought shelter from the heat. He probably slithered into a crack in the concrete and dug his way to the spot where Eugene Meadows ultimately dug him up.

The Meadows family didn’t care how he got there and accepted the researcher’s explanation. The press reported that the Meadows family was still enthusiastic about their newfound friend, with Eugene being quoted as saying “Tinker’s quite a toad.”

Sadly, on June 24th, that’s just one day after he was exposed as a possible fraud, Tinker went into a permanent state of suspended animation – this time it was one that he would never wake up from. Headlines around the world reported “Dead Past Buried Along with Toad”, “Tinker the Toad, Dead at 9 (?)” and, my favorite, “Tinker Toad Croaks – And it’s Literally”

The Meadows family planned funeral services for their late Tinker and he was buried under a cedar tree in the front yard of their home. It was never determined with any certainty if Tinker was a frog or a toad and he could have possibly been a she.

Surprisingly, I found in my research another case of frogs being unearthed. On October 22, 1933, pipefitters were digging below a building’s foundation at the General Electric plant in Schenectady, NY. At a depth of approximately 10-feet, what appeared to be five mummified frogs were found buried in clay.

The frogs were tossed aside and the men continued on with their work. About half an hour later, they were shocked to see the frogs hopping around in the bright sunshine. Four of the frogs got away, but one was captured.

A check of company records showed that the area had once been a swampy piece of land. It was filled in and the building erected in 1899. That means that they had been buried there for 34-years!

I am not a biologist, but from what I have read, it appears that some frogs can go into states of suspended animation for several months at a time, possibly longer. The experts seem to be in agreement that although some frogs can do so, their metabolic rate cannot be slowed enough for them to live either the 9 or 34 years claimed by these pipefitters. One can’t help but wonder if it has something to do with long-term exposure to the pipe dope that they use. 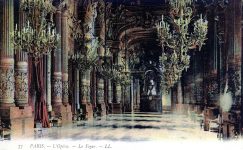 The death of an elderly man in Chicago in 1941 went initially unnoticed. Then it was learned that he was a French nobleman that gave it all away for the chance to love the woman of his dreams. Find out if he ever got the girl... 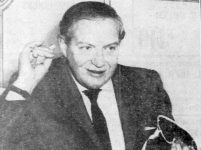