On September 22, 1931, a 35-year-old painter in Chippendale, Australia named Charles Edmund Kneale slipped off of a ladder that he was working on and fell 30 feet (a little over 9 meters) to the pavement below.

A radio message was broadcast requesting that his wife report to the Royal Prince Alfred Hospital because her husband was dying.

Mrs. Winifred Kneale did just that.  Although she was unable to see his face, she was able to identify her husband and he soon slipped away.

Shortly after that, another woman named Mrs. Dorothy Kneale also identified the dead man as her husband, which he really was.

It was an honest mistake.  Both wives had the same last name and were married to unemployed painters, both of whom were living at Hammond’s Hotel, where the accident took place.  And, on top of that, both wives were living in Mosman with different women named Mrs. Brown. 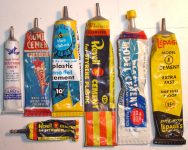 In 1935, someone stole 55 shoes from from a parked car in Providence, Rhode Island. All of them were samples and only fit the right foot.