Early on Sunday, March 13, 1927, a man breathlessly ran into a Hartford, Connecticut police garage. He said that he had witnessed a gang of eight to ten men holding someone down under a grate in front of the Central Baptist Church on Main Street.

Officers Edwin D. Ford and John D. McSweegan, along with Assistant County Detective Gerald R. Risley and the witness himself, all raced off to the scene of the crime.

While driving there, the man told the policemen, “I heard them say, ‘Give it to him! Kill him! Don’t let his head get from under the grate.”

Upon arrival, police did find several blood spots, but were unable to locate the victim.  Two intoxicated men were questioned, but they both claimed to have been in the area for a short time.  They had no knowledge of any crime having taken place.

Other than the blood spots, the police were unable to find the victim or any additional evidence as to what had happened.

They were just about to leave when a man came up to them and said that he had been across the street and saw the gang before they dispersed.

“Did you see any foul play?” the detective asked.

The man replied, “Why, I saw them kill him.”

“Right there.”  The man then pointed to a spot a bit further down the street.

And there it was, the dead body that had been looking for.  What the officers saw was the limp body of an enormous rat. 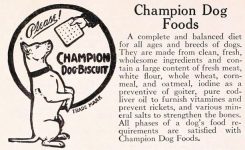 Morris Epstein sued Ben Stillman on September 13, 1930 because his police dog had bitten him. The problem was that his dog was toothless.