And now for today’s story titled “The Sky is Falling”, which begins with a businessman named Alvin Rodecker. He was the head of Aaron DeRoy Management, a company founded by Arthur D. Rodecker in 1927. Why a family with the name of Rodecker would owe a company called Aaron DeRoy is beyond me, but that is really not important to this story at all.

What is important was the fact that the younger Alvin was turning 60 years old. To celebrate this milestone, Alvin and his wife Katherine spent weeks planning a grand trip to NYC. They arrived in the Big Apple on Wednesday, June 22 of 1960 and checked into the landmark Plaza hotel for three days.

The next day, June 23rd, which just happened to be his birthday, the couple decided to have lunch at the Le Pavillon restaurant at 111 E. 57th St, which is right off of Park Ave. It was about seven minutes walking distance away. Now the couple could have chosen to eat anywhere in the city – and there were numerous fine restaurants closer to the hotel – but for some reason, they chose this one.

At around 2 PM in the afternoon, Mr. and Mrs. Rodecker finished their meal and exited the restaurant. “Holy cow, that was expensive,” Mr. Rodecker commented to his wife. He added, “But it was worth it. We’re really celebrating.”

Those were the last words Alvin Rodecker ever spoke. Something fell from the sky and he was knocked out cold on the sidewalk and was bleeding badly.

What could it have been? A meteor? A chunk of concrete from the building? No, it was an 8-pound dumbbell.  You know, the type that guys use to build up muscles to impress the ladies.

Mr. Rodecker was rushed to the hospital but, sadly, he didn’t make it. You can be sure that doctors did everything they could to save his life, but he succumbed to his injuries the very next day.

So where did the killer dumbbell come from? It turns out that the Le Pavillon restaurant was located on the ground floor of Manhattan’s ritziest apartment buildings – the aptly named Ritz Tower – the 41-story home to many people of fortune and fame. And eight floors directly above the exterior canopy of the restaurant was the apartment of actress Arlene Francis and her husband theatrical producer Martin Gabel. Both are virtually forgotten today but were very well-known back then.

The couple was not in the apartment at the time of the incident. For the previous three weeks, they had been staying in their Mt. Kisco, NY home, which was a bit closer to the Westport, Connecticut summer stock play that Miss Francis was performing in.

Since they knew that their Ritz Tower apartment was going to be unused during this period, the couple decided to get their broken air conditioner fixed. It was a large window unit that left a gaping hole in the window frame when it was removed. To resolve this problem, a temporary screen was installed, but it didn’t sit well in the opening. As a result, two 8-pound dumbbells were wrapped in towels and propped against the screen to keep it firmly in place.  Keep in mind that the dumbbells of this time period were all round – they weren’t the flat-sided polygons so commonly used today – that means that they can roll easily.

As you have probably guessed, some sort of action set one of these dumbbells in motion. Investigators quickly learned that Ms. Francis’ secretary Muriel Fleit decided that this particular screen needed cleaning and the maid Effie Turner started to remove it from the window.

As she did so, one of the dumbbells came unwrapped from its towel and rolled across the window ledge. Effie made a quick grab for it, but she was unable to stop its forward momentum. The dumbbell was now in a state of freefall – right down to the sidewalk below where it struck Mr. Rodecker with that fatal blow to his skull.

A few days later, Ms. Francis was scheduled to appear on the TV show “What’s My Line”, a show on which she was a regular panelist from 1950 to 1975.

That was the show’s host John Charles Daly speaking right after the four panelists, including Ms. Francis, were introduced to the audience.

In Ms. Francis’ 1978 autobiography, she writes “I was called in Westport, and I came to New York immediately, shattered and unbelieving and covered with guilt. The latter was not because anyone was trying to attach any blame to me, but it was my room, they were my dumbbells, and I couldn’t help feeling that, however inadvertently, I had been responsible for someone’s death.”

Two weeks after the accident, the district attorney’s office announced that after a thorough investigation, it was concluded that there was no evidence of criminal neglect. It was simply an accident stemming from a bizarre sequence of events.

While there was clearly no criminal guilt here, lawsuits certainly did follow. A suit was filed by Mrs. Rodecker in the New York State Supreme Court on January 11th of 1962 against Arlene Francis, her husband Martin Gabel, and the Ritz Towers Hotel for $500,000.

With that sad tragedy behind them, things were only about to get worse for Ms. Francis. Less than one year after the settlement was reached, May 26, 1963, at 2:20 in the afternoon to be precise, she was driving along the Northern State Parkway of Long Island at about thirty miles per hour. That’s about 55 km/hr for those unfamiliar with the Imperial system of measurement. So, here she is driving with a fine drizzle coming down, car windows fogging in, and then suddenly the car in front of her skidded. She immediately slammed on her brakes and veered right across the highway divider into head-on traffic. Her car collided with another driven by Joseph Arcos of Brooklyn.

Ms. Francis was knocked unconscious, but awoke just as she was being loaded into an ambulance. She suffered a broken collarbone, cracked ribs, a concussion, and the many cuts and bruises common to an accident this severe. She was lucky to be alive.

Sadly, Rose Arcos, the wife of the driver, was killed. And, once again, lawsuits were filed, but this time it was for 1.8 million dollars. That’s about 13 million buckaroos today. This was an amount far above what any insurance policy would have covered at the time.

Again, referring back to her biography, she stated “An accident of this nature, in addition to the sorrow it caused, could very well have had the effect of bankrupting us.” She went on to describe how her lawyers explained that she was being sued for such a large sum because she was a famous actress and was assumed to have had an incredibly high income.

This time there was a trial. Ms. Francis’ insurance company had settled out of court for three of the five victims of the accident. That was for the late Rose Arcos, her 35-year-old husband Joseph, and their 9-year-old daughter Celeste. The agreed-upon amount was $210,000. Of that amount, $162,500 (about $1.2 million today) was for the death of Mrs. Arcos, which was reported by the New York Times to have been the largest award ever made for a housewife up until that point.

There was another couple in the back seat of the Arcos’ car – Mr. and Mrs. Anthony Catapano. They were both injured, Mrs. Catapano most severely with a broken hip. Aetna insurance offered them a lesser amount than the Arcos’s for their injuries and they opted not to take the offer. It apparently wasn’t enough. On June 5th of 1965, the jury handed down their decision and concluded that Arlene Francis had not been negligent in the accident. As a result, the Catapanos were given nothing, zilch, nada.

Arlene Francis, once the star of stage, movies, radio, and later on TV, is mostly forgotten today. She passed away on May 31, 2001, at the age of 93, attributed to complications of cancer and Alzheimer’s disease. 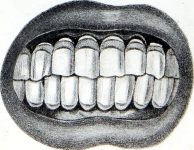 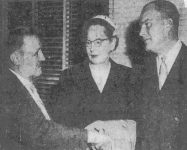 […] to the Useless Information web site, the accident happened on a rainy day: the car in front of her skidded, she slammed on her […]