The following story is a good example of how the press can distort a story. I can tell you for a fact that this is a true story, but as you will soon learn, some of the minor details are highly inconsistent.

The date is certain: It was on Sunday, August 1, 1920, that Jimmie, the beloved singing canary owned by Emidio Russomanno, his wife Marie, and their twelve children, choked to death on either an oversized watermelon seed or had tried to swallow too many seeds at the same time, but either way, this was a sad day for the family. 4-month-old Jimmie was survived by his parents – two other Russomanno canaries named Lorenzo and Marie that he either purchased or had won in a game of chance at Coney Island the previous summer.

Russomanno, who was either sixty-five or sixty-six years old, was so saddened that Monday morning he decided not to open his cobbler shop at 5 Boyden Street in the Italian section of Newark, New Jersey. Instead, he covered the windows to the store with black crepe. Neighborhood residents stopped in to find out what happened and learned of the family’s great loss.

That’s when it was decided that Jimmie should be given a funeral. Russomanno went to see an undertaker to make the necessary arrangements, while the community did their share by donating whatever spare change they could spare. And the end result was what may have possibly been one of the most elaborate and most unusual funerals ever for a pet.

A sign was placed on the cobbler’s door that read, “closed on account of Jimmie’s death.” For two days, mourners lined up outside the door to pay their respect for the late Jimmie. Somber music played nearly continuously from a phonograph.

They entered the cobbler shop in groups of two, where they found Jimmie lying in a custom coffin that measured approximately 12 x 6 inches (30 x 15 cm) and was lined with red silk. Or maybe it was blue plush. Or white velvet. And it may have been made of mahogany. Or, as the New York Herald Tribune reported, it was a cigar box lined with white satin and blue satin forget-me-nots, which was later placed into a small coffin. Well, you get the idea.

What is certain was that Jimmie was surrounded by flowers, burning candles, a crucifix, and a sobbing Mr. Russomanno. To each person he retold the story of Jimmie, all the time wiping tears from his eyes with his white handkerchief.

The press quoted Russomanno as describing Jimmie as possessing “a song as sweet as the voice of Caruso.” Or maybe he said, “He sang so sweet – like Caruso.” Or did he actually say, “So small, but sing. Ah! So sweet, like Caruso?” I’m guessing accuracy was not a requirement for being a good reported back in 1920.

Police had to be called in as the crowd grew. And it grew and grew. A priest arrived and the time had come to take Jimmie to his final place of rest. Six pallbearers carried his body to the awaiting hearse. Cobbler Russomanno took a seat in one of the five horse-drawn mourners coaches hired to transport the family to the gravesite.

Leading the procession was a 12-piece brass band. Or maybe it was a fifteen-piece band. One picture that I was able to locate of the event is a bit blurry, but I was able to count at least ten instruments. No matter what the count, they played funeral dirges as the procession moved through the streets of Newark.

The entire time the crowd continued to grow and grow. Approximately 500 people followed the behind on foot, while police estimated that 10,000 people stood alongside to witness this unusual event. Some were saddened by Jimmie’s passing, while others saw the humor in it and laughed.

The total cost of the funeral was estimated to be somewhere between $200 and $400, nearly all of which was donated by the community. Adjusted for inflation, Jimmie’s funeral cost would have been between $2300 and $4600 today.

Jimmie the Canary was interred at 42 Cutler Street, near the Branch Brook Park, under a morning glory vine. As his casket was lowered into the ground, the priest read passages from the Life of Washington. A tombstone in the shape of a cross with the image of a canary carved at its center was planned for the grave. Whether that was ever done is uncertain, but I can tell you not to bother going to visit his grave. Urban renewal in the 1950s destroyed Newark’s Little Italy. Jimmy’s exact burial location has since been replaced by modern housing and lots of blacktop.

Now, just to give you an idea of how wildly distorted a story can become in the tabloid press of the 1920s, let me share with you some of the facts as described by the Washington Post one month later on Sunday, September 5th of 1920.

Russomanno, whose first name is never mentioned, was claimed to have been a wealthy banker. Jimmie was a famous singer throughout the community. It was a hot night and the cobbler’s son Mario fed Jimmie that deadly watermelon seed. Jimmie was buried in a gold casket which cost $1100. The exact location of Jimmy’s burial was supposedly a secret so that no one would steal his gold coffin. The procession included a 50-piece band and 50 carriages. And the total cost for the funeral was $5000.

I guess they’ll do anything to sell papers… 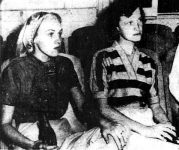 The women who worked for Southern Bell in Miami back in 1950. Poorly paid, they figured out a unique way to smuggle money out of the coin counting room. 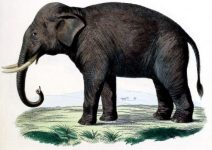 Eleven circus elephants died from arsenic poisoning within a one-week period in 1941. The search for the murderer was on...