If you were about to set off a bomb, how would you plan your escape? By car, a boat, maybe a plane? Well, this is the story of three guys that planned to do so in a homemade submarine. Sounds crazy, doesn’t it? Well, as mankind has repeatedly shown, there are some people out there that do some fairly stupid things.

Today’s story begins with an extortion note. One of those “pay up or pay the price” type notes. The note was placed near the front porch of a home at 2612 East Shorewood Boulevard. It was intended to be delivered to Rowland H. Davie, the manager of the Sears Roebuck stores in the Milwaukee area on July 22, 1940. This was the first mistake of the extortionists. Davie was the former occupant of the house. Instead, Circuit Judge William J. Shaughnessy now lived there. Yes, you heard it right – a bigwig judge. The police were immediately brought in on the case.

I won’t read the whole note, but here are a few of the highlights:

Jumping a bit ahead:

It instructed Davie to take an ad out in the newspaper that said “Joe will be at home. R.H.D.” That was the signal to the extortionists that they were willing to play ball.

The note then instructed him to rent a plane on Friday the 26th and fly straight in a direction to be given later on. Two white lights would act as a signal as to where the money should be dropped.

The note, as well as three subsequent notes, were all simply signed “We.”

As promised, a small bomb went off the next night at Sears store in the northern part of the city. It was basically a 6″ long pipe-bomb triggered by an alarm clock. It was placed in a 3rd-floor storeroom at the Sears store, most likely by someone that knew the inner workings of the store. The damage was minimal, and no one was hurt. Security was doubled at the store and Mr. Davie was given a bodyguard.

The police initially remained hush on the case in the hopes that the criminals would contact Manager Davie again. And so, they did. At 9:12 Friday night, he received a short phone call: “Tell Mr. Davie that Joe cannot make it tonight. Will tomorrow night at the same time.” The caller abruptly hung up.

It was not long before this case was solved. On August 3rd, less than two weeks after the first extortion note, police announced the arrest of three Milwaukee men. They were 23-year-old Walter Minx, an ornamental ironworker, his 27-year-old brother Kurt, and Kurt’s 28-year-old brother-in-law Daniel Carter.

How did the police solve the case so quickly? It seems that a piece of ornamental wire was used to make the trigger for the bomb and a Sears employee recalled that several cashier cages had been built by Walter Minx. BINGO!

Walter Minx admitted to the whole thing – sending the extortion note, planting the bomb, and making the phone call.

But then police found the real shocker in his basement. He had built a seven-foot submarine to escape under the surface of Lake Michigan with the money. Now I do not know a lot about submarines, but I am smart enough to know that no matter how handy one is, you should probably never try to dive under the surface in one of your own creations.

The submarine was fairly light – supposedly two people could lift it onto a trailer. Power was supplied by two batteries that ran an automobile starter motor. They dragged this thing into court for the trial and it was mostly complete: it had a conning tower, an oxygen tank, tin-can ballast tanks, and hand-operated diving fins.

The plan was to have the money dropped out of the airplane at about ten miles out over Lake Michigan, retrieve it, and then submerge. Walter, who built the sub, would be the only one aboard. Once he got the money, he was going to head westward to a governmental pier. As he approached the shore, the money would be sealed in an inner tube to protect it, the sub sunk, and Walter would swim with the tube to the shoreline.

Just in case things didn’t work out as planned, he equipped the sub with enough oxygen to keep him submerged for several days.

There was just one problem with this whole scheme. Submarines need to be able to go under the water to be effective. Initial test runs in gentle waters worked almost flawlessly. But when these bumbling criminals tried out their steel creation on the Saturday prior to their arrest, the more turbulent waves caused it to float. No wonder they never returned the call that Saturday to Mr. Davie.

Like all good criminals, they hatched a new plan. They were going to have Mr. Davie hire a motorcycle courier to go get the bag of money and then he would receive further instructions on where to leave it.

Investigators found two young boys that were hired as go-betweens. Both positively identified Walter Minx in a police lineup of seven men. One of the boys was paid a quarter to make the phone call to Mr. Davie to let him know that Joe couldn’t make it that night. The real reason for the delay was that it was raining that night and they needed to postpone another day. It was on that very next day that they found out the sub wouldn’t submerge, and they had to abandon their plan.

I am sure that you are shocked to learn that the Minx brothers were charged with extortion and the bombing of the Sears store. They each faced a maximum of 20 years behind bars. Bail was set at $25,000 for each of the brothers. Daniel Carter was charged with conspiracy and for being an accessory to the crimes. His bail was initially set at $5,000 but was later reduced to $1,500. It didn’t make much difference. None could make bail, and all sat in jail until the trial.

Both Minx brothers testified at Daniel Carter’s trial that he had nothing to do with the crime. Charges against Carter were dismissed on September 20, 1940. Walter Minx, the brains behind this entire scheme, was released from prison in 1946 and eventually became a master plumber. He recently died on June 30, 2009.

If you’ve ever wished for disposable swimwear, designer Morton Almondt offered up the perfect solution in April of 1967: A bikini made from aluminum foil. 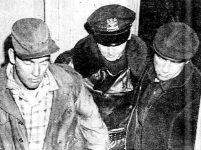 Gaston Martens and James Rayster were robbed on January 1, 1959, by two men who grabbed the wrong box.