He Wants His Alimony Back

On July 18th of 1933, 83-year-old Howard W. Metz appeared in a Detroit court to make a claim against the estate of his late wife, a woman that he had not seen in thirty years.

Back in 1904, he had asked for a divorce from his wife Jeanette, but the request was denied. Yet, he was still forced to pay her $25/week in alimony. He never missed a single payment, even after he retired.

Then, in February of 1931, Jeanette’s mom died and she inherited the family home. Boarders at the residence now provided Mrs. Metz with a steady income and she finally decided to grant her estranged husband’s wish and get divorced. She intended to marry another man named Walter E. Johns.

This meant that she was still married to Mr. Metz and he would inherit everything, even though they had not seen each other in thirty years.

Her future husband, Mr. Johns claimed in court that she had intended for him to be the heir, not her out-of-the-picture husband. In addition, one of her boarders also made a claim against the estate.

On the stand, Mr. Metz started crying over the loss of his mother-in-law and wife, to which the judge replied “You don’t have to put on an act for me. You cannot make me believe that you had any affection for a woman that you had not seen for 30 years. You are nothing more that a prodigal husband and by good fortune heir to $30,000 unless these gentlemen can produce documentary proof of their claims against your wife’s estate.” 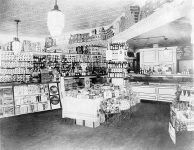 She Thought Robber Was Fooled

In 1950, a man robbed Milt's Food Market in Chicago. He demanded all of the money in the register, but the owner's wife told him that the register was still locked. Just how did he manage to get the money?

No Locks at Denny’s

In December of 1988, the restaurant chain Denny’s decided to close all of its 1,221 stores for the Christmas holiday. That's when they found out that many of their restaurants lacked door locks.