I’m sure that you’ve heard the common misconception that lemmings commit mass suicide. Well, a similar type of event happened on July 22, 1966 to a flock of sheep in Bourg St. Maurice, France.

Forty-two-year-old Simon Balma bedded down his flock of 2,100 sheep that Friday night. With his dogs left in charge to guard the sheep, Simon went to a nearby village to join up with other shepherds.

The next day his entire flock was gone.  Half of the sheep were found safe about a half-mile (800-meters) away, but the other half was gone. It was later realized that 1,050 of his sheep had gone the other way and lept over an Alpine cliff to their death.

The cause of this death leap could not be determined, but it was assumed that either the dogs or another animal frightened them.

On June 3, 1952, Mrs. June Rivers discovered that the man that she had been intimate with was not her husband. William Williams was accused of raping her. 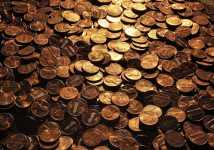 Residents of Amityville, NY hoarded pennies in 1902 so that they could melt them down to get the gold out of the coins.