The Ugliest Thing the President Ever Saw – Podcast #93

Flashback to May 23rd of 1965 when it was announced in the press that famed artist Peter Hurd of New Mexico had been chosen to create the official likeness of then-President Lyndon Johnson. This news really shouldn’t have come as much of a surprise. The Johnson’s were big fans of Mr. Hurd’s work and had requested that two of his canvases be loaned to the White House for display. In addition, Hurd had previously painted a portrait of the President for a Time Magazine cover – he was crowned Time’s Man of the Year on January 1, 1965 – and the President and his wife were mostly happy with the results. Hurd indicated that he would have the new portrait completed within one year.

Initially, Hurd was unsure as to what would appear in the portrait, other than the President. LBJ was well known for being a bit of a cowboy, but painting a man in a business suit with a western scene behind him made little sense.

A couple of months later Hurd began work on the painting and expressed concern that the canvas that he chose maybe a bit too large. “They haven’t said so in so many words, but I think that the Johnsons don’t want anything too big.” He continued, “I suspect that they don’t want people saying that those flamboyant Texans couldn’t do with a modest-sized portrait.”

Hurd also commented as to how he found out that he had been chosen to paint the President. “My wife and I were invited to a White House bash for the President of South Korea. I got out my evening clothes, and they smelled of mothballs because we don’t use them down here at the ranch. I felt self-conscious as I stood by the President, and then he calmly dropped the bomb when he introduced me to the Korean President, ‘I want you to meet the man who’s going to do my portrait.’”

LBJ may have chosen Hurd to do the painting, but that didn’t mean that he would cooperate. Lady Bird, the President’s wife, basically forced her husband to pose for the painting. For the first sitting, which took place at the LBJ ranch, Johnson was in deep discussion with then-United Nations Ambassador Arthur Goldberg and kept jumping out of his seat and pacing the floor. A portrait artist needs to study facial expressions, but Hurd could never get a good look because Johnson kept rubbing his chin and eyebrows.

The second sitting occurred at Camp David, but LBJ was so exhausted that he fell asleep. All Hurd could see was the top of the President’s head. The total time between both sessions was about 50-minutes. As a result, Hurd was forced to complete the painting from photographs. He even went as far as asking a nearby rancher with similar hands to be a stand-in for Johnson. The rancher drove 140 miles (225 km) round trip each day just so the artist could paint his hands. Hurd offered him another of his paintings in exchange for his modeling services.

That April, after approximately 400 hours of work, the portrait was completed and shipped to the Johnson Ranch in Texas with strict instructions that it was not to be unpacked until the artist arrived. And, just like a child trying to grab a sneak peek beneath the wrapping of Christmas gifts, the Johnsons had the portrait immediately unwrapped.

The unveiling did not go well. Neither the President nor Mrs. Johnson liked what they saw. LBJ immediately rejected the picture and blurted out that it was “the ugliest thing I ever saw.”

So, let me see if I can describe the painting in words. Imagine a determined-looking President Johnson peering out beyond the left edge of the painting. He is wearing a dark suit with a book simply titled “History” under his left arm. Behind him, the Capitol dome lights up the dimming evening sky. I’m the first to admit that art is not my thing, so I will simply state that while it is certainly not the best portrait I have ever seen, it is far from the worst.

Here are the Presidential couple’s complaints, as told to the reporters by Mrs. Johnson’s press secretary Elizabeth Carpenter:

Next, the Capitol building in the background was far too bright and “inappropriate for this kind of portrait.” Mrs. Johnson supposedly wanted the Capitol dome to be “misty and hazy.”

And, lastly, “The positioning of the figure for the painting is not consistent with other White House portraits.”

Shortly after the news of the rejected painting broke in the Washington Post, the 62-year-old painter was contacted by the New York Times. He said that he felt that the President’s remarks were “very damn rude.”

He continued, “I’m deploring all this publicity, but I do have to defend myself to a degree. I was damn glad to get out of the whole thing. I don’t want any recrimination against them. They’ve got problems enough. Mrs. Johnson couldn’t have been kinder.”

Hurd recalled that when Johnson rejected the painting, he said, “What do you like, Mr. President? And he said, ‘I’ll show you what I like’ and he whisked out the Rockwell.” This was a painting that Norman Rockwell had previously done of LBJ, which was created mostly from photographs. Hurd commented, “I’ve never learned to copy photos.”

In general, most Americans sympathized with Hurd and further help cement Johnson’s reputation as a man who had no patience for any opinion other than his own. The Smithsonian contacted Hurd expressing their desire to purchase the painting for display in their new National Portrait Gallery, but the artist decided to hold on to the portrait for a bit longer.

Instead, he placed the painting on a tour of small galleries to allow the public to make their own judgment as to the quality of the work. Its first showing was at the Gallery of Fine Arts in Columbus, Ohio on January 12, 1967. An estimated 400 gallery patrons saw the painting for the first time and gave it mixed reviews, although no one thought it was as bad as the President stated.

Of course, if you are going to declare a work of art to be the ugliest thing that you ever saw, you can bet that someone will try and do even worse. On February 6, 1967, the Richard Gray Gallery in Chicago opened a one-week exhibit of really, really ugly LBJ artwork. My favorite was a life-sized wooden sculpture with an extremely long, brightly painted Pinocchio-like nose, giant ears, and a lamp. It was titled “Light Bulb Johnson.”

The Omaha World-Herald held a “Paint-the-President” contest. The winner was a 37-year-old mailman named Carl Bieber. He beat out 1,550 other entries that were “executed in everything from topsoils to oils.” A group of fifth-graders submitted a work made out of playground mud. Bieber was awarded $50 (about $360 today) for his efforts. His painting was done in ink and enamel on a sheet of plastic. I’m sure that painting is long lost, but I can’t help but be curious as to whether it was better or worse than Hurd’s work for the President.

For a short time, there was a popular pun circulating around Washington: “artists should be seen around the White House – but not Hurd.” That’s Hurd as in artist H-U-R-D.

Then came the news on August 13th that the painting had gone missing. Even though the President hated it, it was reportedly valued at $30,000 (about $215,000, adjusted for inflation). All that was known was that it had been en route from Albuquerque to an art gallery in Carlsbad, New Mexico. The next day it was announced that the painting had been located aboard a train in Dallas, Texas. It has somehow been misrouted.

In the end, Johnson did select a portrait that he liked. It was painted by Elizabeth Shoumatoff. For that painting, LBJ sat for seven different sittings. My guess is that he learned his lesson from all of the bad publicity he received after rejected Hurd’s painting.

As for Hurd’s painting, the Smithsonian did finally purchase the portrait for a much-reduced price of $6,000. Johnson requested that it not be displayed, so it was placed in storage for a while. I haven’t personally checked, but according to the Smithsonian website, the painting is currently on display in the National Portrait Gallery.

Three days before leaving office, Johnson reflected on the whole painting fiasco. “I never said it was ugly. I thought it was a pretty good likeness, except for one little detail: it left off the halo.”

At least he had a good sense of humor about it all.

In this segment, I give a brief overview of who I am, where these stories originated from, and what to expect in the future. 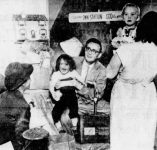 Long-forgotten story of Robert Murphy and his family as they were walking through Pennsylvania. A great story of how a community came together to help others in need.