Just as mechanics Gaston Martens and James Rayster drove up to the Fifth Avenue Coach Co. garage in Manhattan on January 1, 1959, two men accosted them.  One hit Rayster with a rubber hose while the other snatched a box, which the crooks believed contained the company’s $3,000 payroll.

Police gave chase to a car that had sideswiped several other vehicles on the Henry Hudson Parkway.  They arrested brothers Frank and John Romano for the crime against the two mechanics.  It turns out that they never had the $3,000 payroll that they sought. Instead, these bumbling criminals had grabbed the wrong box.  The one that they stole contained a custard pie. 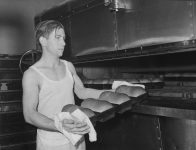 The U.S. government banned bakeries from slicing bread during WWII. Let's just say that things did not go as planned...

In 1941, the Plainfield Teachers College football team was unstoppable. That was until a reporter exposed a shocking secret about the team and their storybook season was brought to a grinding halt.